Shelby Electric Cooperative (SEC) member-consumers enjoyed a porkchop lunch and a variety of activities for young and old alike at their 81st Annual Meeting of Members held at the Shelby County 4-H Fairgrounds on June 7, 2019. Prior to the business meeting, the crowd was entertained by The Hood Family Band and Live Line Safety Demo, Inc. Youngsters were treated to balloon animals, face painting, and a bounce house. 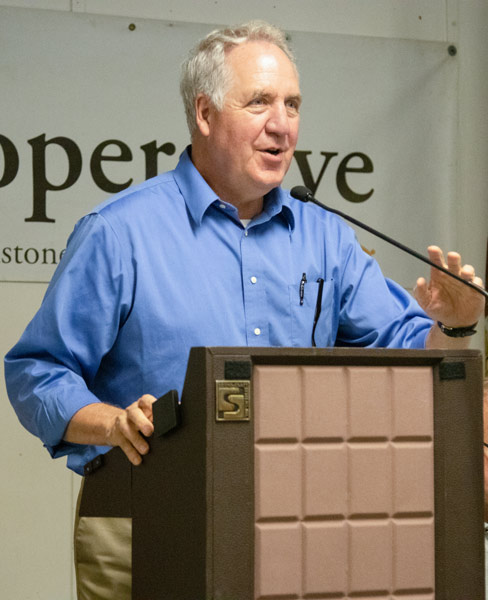 Congressman John Shimkus came up and talked briefly to those in attendance.

Following the national anthem and a few introductions, Congressman John Shimkus came up and talked briefly to those in attendance. “I’m honored to have the opportunity to speak to you. I would like to commend SEC for their work bringing high-speed internet to the underserved rural areas, as well as their support with rural economic development efforts. Cooperatives, like SEC, create the success stories I like to bring back to Washington, D.C.,” noted Shimkus.

The highlight of the meeting came early on when the American Red Cross presented its Certificate of Merit to the 14 linemen instrumental in saving the life of fellow lineman, Kevin Carlen, during an annual pole top rescue training. The Certificate of Merit is the highest award given by the Red Cross to individuals who save or sustain a life using skills learned in a Red Cross Training course and is signed by the President of the United States.

“This is the reason I get up in the morning and come to work everyday. To meet people like Kevin Carlen and the guys who used their Red Cross training to save his life,” commented Traci Johnston of the Red Cross who coordinates health and safety training regionally. After handing out the awards, American Red Cross South Central Region Executive Director Dawn Morris expressed, “I was able to meet Kevin as he was being interviewed, and to hear his story gave me chills and I even found a few tears coming down my face. What an honor to be here today handing out the Red Cross’s top life savings award.” 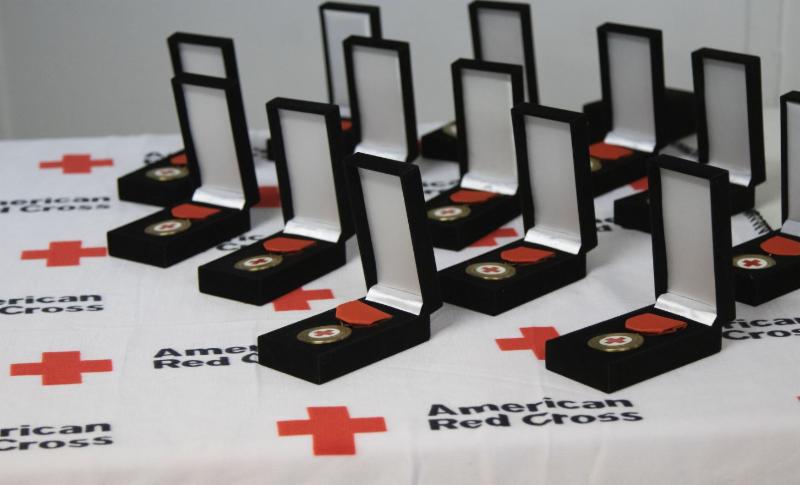 During Shelby Electric Cooperative’s annual meeting, the American Red Cross presented its Certificate of Merit to the 14 linemen instrumental in saving the life of fellow lineman, Kevin Carlen, during an annual pole top rescue training. The Certificate of Merit is the highest award given by the Red Cross to individuals who save or sustain a life using skills learned in a Red Cross Training course.

SEC Board Chairman Brent Lively greeted members and guests and explained the cooperative doesn’t generate the power it sells to its members; that power is generated by its power supplier, Prairie Power, Inc. Lively noted he is very proud of the fact that SEC elected their first woman to the board of directors. Katie Ohmes will be serving a three-year term.

Lively also recognized outgoing directors Mark Lash and John Scott with plaques of appreciation for their years of sincere service to the cooperative and mentoring of new board members. They were also presented with the National Rural Electric Cooperative Association Porcelain Eagle Award on behalf of cooperative members.

Josh Shallenberger, Shelby Electric president/CEO reported that the cooperative is in good financial condition and has been able to continue giving capital credits. He also explained the cooperative’s efforts to remain relevant for more than 80 years and the most recent survey to gauge members’ interest and satisfaction with the co-op.

“Overall, member satisfaction on the American Consumer Satisfaction Index (ACSI) stands at 84, which is higher than well-known companies such as Apple, Cadillac and Coca-Cola.”

He encouraged members to stay engaged with the cooperative and reminded them how they exercised the cooperative principle of democratic participation by electing two new members to their board. David Keown, Findlay, District 3 and Katie Ohmes, Pana, District 6 were elected to three-year terms. They replaced outgoing directors J. Mark Lash of Findlay, who served for 18 years and John Scott of Pana, who served for 24 years.

Shelby Electric is committed to providing superior service based on four core principles: integrity, accountability, innovation and commitment to community. The co-op serves more than 9,974 meters over 2,197 miles of line in parts of Christian, Cumberland, Effingham, Fayette, Macon, Montgomery, Moultrie, Sangamon and Shelby counties. For more information visit www.shelbyelectric.coop. Like the cooperative on Facebook,  facebook.com/YourCoop or search Shelby Electric Cooperative.