Member-owners of McDonough Power Cooperative gathered at The Crossing in Macomb on August 20 for their 82nd Annual Meeting of Members. They were treated to a porkchop sandwich dinner and some sweet surprises in the form of kettle corn and lemonade shake-ups before the start of the business meeting. Entertainment prior to the meeting was provided by the group Crossover. 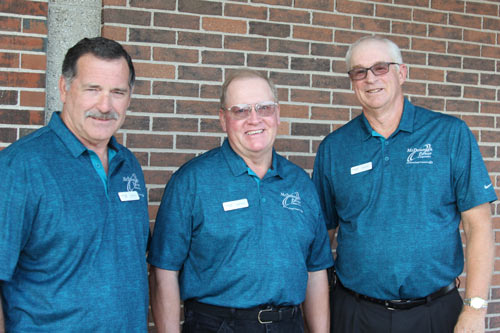 During the meeting, members re-elected three members to their board of directors. Left to right, Mike Cox of Macomb, Walt Lewis of Blandinsville and Steve Hall of Roseville.

Jeff Moore, McDonough Power chairman of the board, welcomed members and reported that the board has authorized the return of $400,000 in capital credits to the members. Moore encouraged any members considering their own solar installations to talk with the cooperative, not to discourage installation but to ensure members know the facts about the benefits promised from the solar installers.

Moore also thanked members for their participation and generosity in the Operation Round Up program. He said, “The program continues to be a shining star providing grants to organizations that serve our friends and neighbors. It goes to volunteer fire departments, food banks and a host of others.” He reminded members that the Coats for Kids program is going strong and is supported by the co-op’s sale of scrap wire. CoBank, the cooperative’s lender, and its Sharing Success program, has helped increased donations through its matching grant program.

The 2019 LaVern and Nola McEntire Lineworker’s Scholarship was presented to Zachary Suter of Spaulding by Mike Smith, McDonough Power president and CEO. McEntire, who was unable to attend, was a lineman for McDonough Power from 1949 to 1991. He and his wife endowed a scholarship to help pay for costs to attend the lineworker’s school conducted by the Association of Illinois Electric Cooperatives in conjunction with Lincoln Land Community College, Springfield.

Smith then discussed why he loves the cooperative business model and the principles by which it is governed. “We are non-profit and have a long history in rural America that is driven by service before profit.” Smith said. “We are committed to our community and those we serve.”

Smith said he likes renewable energy and believes in wind, solar, hydro and geothermal power. “By and large, there is a place for renewable energy in a utility’s portfolio.” He also encouraged members to do all they can to conserve energy by looking at adding insulation, better windows and better construction.